If you live in a climate that’s even the slightest bit rainy or wet, then you know all too well about slugs and snails and the damage they can inflict on a garden.

The wetter, rainier and more temperate your climate is the more likely you are to have an issue with slugs. Slugs like to hide in moist, dark, shady spots in the daytime and then come out in the evening, rainy days and through the night.

They’ll come out in the daytime too if it’s cool and wet enough. They have a voracious appetite for your almost anything in the garden, soft leaved perennials annuals and they eat any fallen fruit or berries as well. In order to have a beautiful garden you’ll need to have an attack plan in place to defend against them.

What to do and how to combat them is always the question for many gardeners.

Slugs and snails are similar creatures, both in the Mollusc family. They can essentially be treated the same when it comes to control and eradication of them. The word slug is also often used as part of the common name of any gastropod mollusc that has no shell, a very reduced shell or only a small internal shell.

The external anatomy of a slug detailed below. it’s paraphrased from Wikipedia.

Tentacles Most land slugs they have two pairs of ‘feelers’ or tentacles on their head. The upper pair is light sensing and has eye spots at the ends, while the lower pair provides the sense of smell. Both pairs are retractable.

Mantle On top of the slug, behind the head, is the saddle-shaped mantle, and under this are the genital opening and anus. On one side (almost always the right hand side) of the mantle is a respiratory opening, which is easy to see when open, but difficult to see when closed. This opening is known as the pneumostome.

Tail The part of a slug behind the mantle is called the ‘tail’.

Keel Some species of slugs have a prominent ridge running over their back along the middle of the tail (sometimes along the whole tail, sometimes only the final part). This ridge is called a ‘keel’.

Foot This is what the flat bottom side of a slug is called. Like almost all gastropods, a slug moves by rhythmic waves of muscular contraction on the underside of its foot. It simultaneously secretes a layer of mucus that it travels on, which helps prevent damage to the foot tissues. Around the edge of the foot in some slugs is a structure called the ‘foot fringe’.

Vestigial shell Most slugs retain a remnant of their shell, which is usually internalized. This organ generally serves as storage for calcium salts, often in conjunction with the digestive glands.

For your attack plan, you can choose from a wide variety of remedies ranging from barriers to deterrents to poisons and traps.

They can all help you deal with the slimy little icky creatures. If the slugs live in a favourable environment, slugs can reach 6″ – 8″ long and even more depending on the type of slug it is. Over the years they have destroyed hundreds of pounds of my garden and harvests. I’m not a big fan of them. 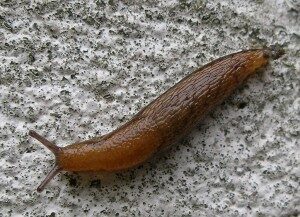 Thankfully, we have several options when it comes to getting rid of them.

At one point in the past, I was told to put Marigolds all around the perimeter of my garden because they repelled slugs. Ok, so I planted them all around and made walls of marigolds encircling my lilies in the early spring as soon as I could get them from the stores.

Well, it did work, but not quite as planned. The slugs loved and devoured my marigolds!

So in the end, the slugs stayed off my Lilies, which is ultimately what I wanted but the Marigolds became a sacrifice but still acted as the barrier as they were originally intended to be. 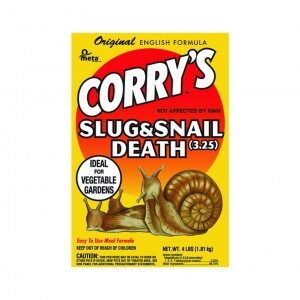 Corry’s metaldehyde powder works well but you need to make sure your domestic pets don’t get into it. It’s a true pesticide.

Use it every week or so throughout your rainy season, depending on how fast the powder deteriorates. By doing this you will kill all the upcoming generations of them and not have an issue.

Iron pellets present as Ferric phosphate is the best option if you don’t want to use chemical pesticides. The iron is a natural element found in soil, so the uneaten bait just gets absorbed into the soil.

When the slug or snail eats the iron they immediately stop eating, which instantly stops them from destroying your garden.  They will then crawl off to die within one week and there is no mess to clean up.This type of slug bait is what currently use in my garden.

You’ll need to empty it of the bodies everyday and put in new beer. Designs such as this sunflower pictured here are very effective.  If you do this consistently you will have a huge impact on their population and greatly reduce their numbers.

Copper works by creating a little electric shock on the underside of the slugs and snails. The idea is that they will be less likely to cross the barrier.

Copper can be expensive and it loses its power after a while and eventually doesn’t shock the slug.

Make a barrier of this and they slugs will not have an easy time crossing that because the hair gets stuck in their slime.

However, personally I’m not so sure I want clumps of hair all over my garden.

Ground up eggshells are very sharp and uncomfortable for the slug to crawl across. They will be deterred by a wide barrier of eggshell around your plants, containers and garden area.

The eggshells have sharp edges and the slugs will choose an easier path first before they choose to go across the sharp barrier to your yummy strawberries.

This one works but you need to keep the eggshells fresh and the barrier unbroken. Re-establish your barrier after a heavy rain or if it gets kicked or disturbed in any way.

But also note that this method does not consider the slugs that are already living within the boundary you set with your ring of eggshells.

Ducks love to eat slugs and slug eggs! If you don’t own any yourself, do you know someone with a farm or who owns a few ducks? Ask if you can borrow them for a few hours here and there over the summer.

The ducks will get some bonus ‘free range’ time when they visit your garden and they get a to have a yummy snack of slugs and slug eggs at the same time. They root up the eggs with their bills and eat the adults in one gulp happily.

This duck method of dealing with the slug issue works well but they do require some control.

They have the capability of eating your plants and causing some damage to young seedlings when they walk around. They tend to trample more than they walk.

If your garden is large, then they can stay out there for longer each time but still keep an eye on them. This method only works with ducks, don’t use chickens, geese or turkeys.

It’s also possible to capitalize on the slugs natural desire to hide in dark damp places. Place 2×4’s or 2×6’s on the ground around your garden.

Leave them there overnight and the slugs will gather underneath it. Then in the morning just pick up the wood and scrape off all the slugs into a soapy bucket of water. This method is slightly icky but it’s completely chemical free and it works.

Thankfully slugs are easy to control with consistent effort to control them such as the suggestions listed above. The best part is that your garden will quickly recover after the removal of the slugs and start thriving and blooming again.

If you employ even one of these methods of slug control you will likely see a great reduction in their numbers and much less damage to your garden. It’s best to use a couple of the methods in conjunction with each other to see the best results.

If you live in a wet climate then you will always have slugs and snails but knowing what to do about them is key. Your garden will be saved and free to happily grow all season long without the threat of any more slug or snail damage.

Please leave a comment and tell me if you have to deal with slugs and if you do, what is your method of getting rid of them?