Perlite and vermiculite are two minerals that expand greatly when heated. They are commonly combined with bark or peat moss in potting mixes.

They’re often used as the growth medium in hydroponics systems. They’re also used in combination together.

They are both clean, sterile, odorless and non-toxic. Neither will rot or turn moldy. When mixed with a fertile soil the roots of young plants will get a great head start.

The snow white granular particles of perlite are a form of volcanic glass. Each particle contains about 6% water. When they get heated quickly to 1800°F they become porous.

Perlite has a neutral pH, contains no seeds, insects or diseases. Tiny cavities on the surface of the perlite hold plant nutrients and moisture (3-4 times is weight), the space between them creates drainage and aeration.

Disadvantages: lightweight and can float to the top of the soil, may create breathing problems for those susceptible, more expensive than vermiculite. 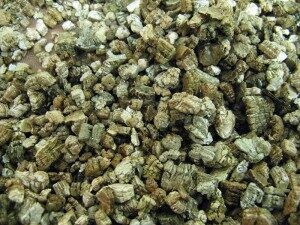 Vermiculite is a silicate material. Like perlite, it’s also able to hold moisture and plant nutrients. It also has a neutral pH.

It’s mined in the USA, Brazil and South Africa among other places. The vermiculite is a slightly different colour from each different place that it’s mined.

It can hold potassium, magnesium, calcium and ammonium that feed and support young growing plants. It mixes well with soil.