Well, what am I talking about then…carrot sprout carnage? Back up a little while when I created a small raised bed on a pallet about two weeks ago. This unique pallet was re-purposed and used to make a raised bed for planting Rainbow Blend and Purple Haze carrot seeds.

Anyway, it’s late April, early May and summer is right around the corner. The carrots have been planted for about a month now and are just about 1/2″ tall and stretching out their slender cotyledon leaves.

In this area we don’t get summer sun and warmth until a few serious spring rain storms have gone through. For this area, that means rain and lots of it!

This is normal and usually there is little damage to the garden and the new baby sprouts, but yesterday was different. This was not a normal storm that came through.

My local area on the west coast of BC received approximately 83 mm of rain in less than one day! Even for this wet, rainy location of the country this is a huge amount of rain.

It poured and poured some more, for hours and hours with HUGE drops just pounding everything and causing rivers down the street with flooding and damage all over. It sounded like a freight train barreling across the roof of the house for nearly the whole day and night.

We normally get less than 83 mm of rain in the entire month of May, yesterday we received that amount in less than 24 hours! As far as gardening goes, rain can be considered a serious “pest” and can be a hazard to your seedlings and eventual harvests.

Rain is good for the tender little sprouts, but vicious rain like what’s described above can be detrimental to a garden and even lethal to baby sprouts.

A month or so ago, I planted the carrot seeds in the “raised bed on a pallet”. They had just begun to sprout and emerge from the soil with the Cotyledon leaves showing their new perfect beauty last week. This is their most tender and vulnerable time, the rain struck at such a bad time.

Hindsight is always 20/20 and I’m not sure why I didn’t run to their rescue when the rain began, but I didn’t. I probably didn’t want to get that wet!

The next day the bed looked like a battlefield with not a lot of survivors. Many of the baby sprouts were crushed, tipped over and broken, some were buried in mud or just simply gone.

The bed had protection to keep cats from digging in it, which are the green metal grids you can see in the image. However, these were actually a bad thing when that heavy rain struck. 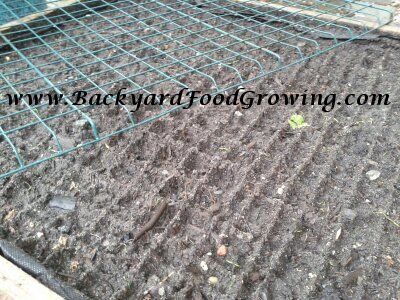 They added an ability for the rain to “dig” down in to the soil and seriously harm the sprouts. In the image the damage from the grid can easily be seen as the rain dug square indents right out of the soil. You can just barely, faintly see the poor flattened carrot sprouts.

In this case since I didn’t protect them, it’s likely that I will have to abandon the few seeds that made it through the storm and replant the whole bed. Lesson learned. 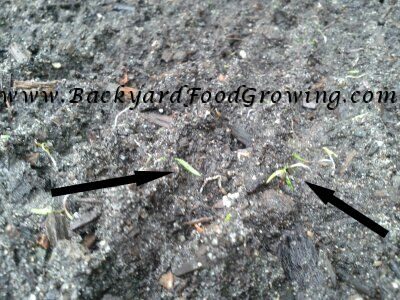 The other option is to wait two weeks and see how many survived and how many didn’t. This isn’t preferable because losing two weeks of growing time while waiting to find out that not many survived, then I would just be that many more weeks behind on the road to another crop harvest.

The days passed quickly and I didn’t replant but then decided to let them grow and see just how many made it through that storm. It looks like about 75% made it and survived the rain. Most of them needed a little help “up” in getting unstuck from the soil and mud. Once freed they stood up again and resumed growing.

Have you had any disasters in your carrot patch? Leave a comment and share the story or just ask if you have any questions.